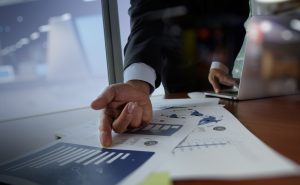 'Big Four' consulting firm and accountancy PwC has published a detailed report on the current state of blockchain at large companies. The report provides unique insight into the blockchain industry in a very specific sample-set: companies with 500 employees or more but from the legacy banking sector and financial technology startups. If you read between the lines though, the message is clear: it's go, time. While investment last year was at an all-time high, future plans to invest show other technologies taking precedent. The technology is moving out of the lab, and dividends will likely be expected soon.

"The technology is moving from hype to reality and we will likely see business use cases becoming more common."

Seventy-seven percent of respondents said they expect their companies to incorporate blockchain into their production by 2020. But a separate section about upcoming investment plans paints a different picture. While half of all financial technology companies intend to focus on blockchain in the next 12 months, only 19% of large banks made the same claim.

On a list of future investment areas related to technology among the same-sized companies, blockchain was near the bottom, with only 20% of respondents saying they would invest in the next 12 month. At the top of the list was 'data analytics' with 74% of respondents expecting to invest during the same period, followed by 'mobile' with 51% and 'artificial intelligence' with 34%, respectively.

Other interesting takeaways from the report include that 90% of payment companies are "heavily invested" in blockchain and plan to adopt the technology as part of a production system by 2020. Twenty-four percent of the respondents identified as "very or extremely familiar" with blockchain, an increase of 7% since last year, with North American respondents being the most familiar across regions. While 77% expect some sort of live implementation of blockchain by 2020, 55% say it could happen as soon as 2018.

As with the other so-called 'Big Four' accounting firms, PwC has been positioning itself as a leader in the blockchain industry. In November, the firm released details about Project Vulcan to study bitcoin, and last month, it joined the Crypto Valley Association in Switzerland. Going forward the report finds that the most likely business use cases for early blockchain implementations were payments infrastructure, fund transfer infrastructure, and digital identity management.

"We have also seen growing interest in the technology from insurance companies in areas such as personal and marine insurance, including claims processes."