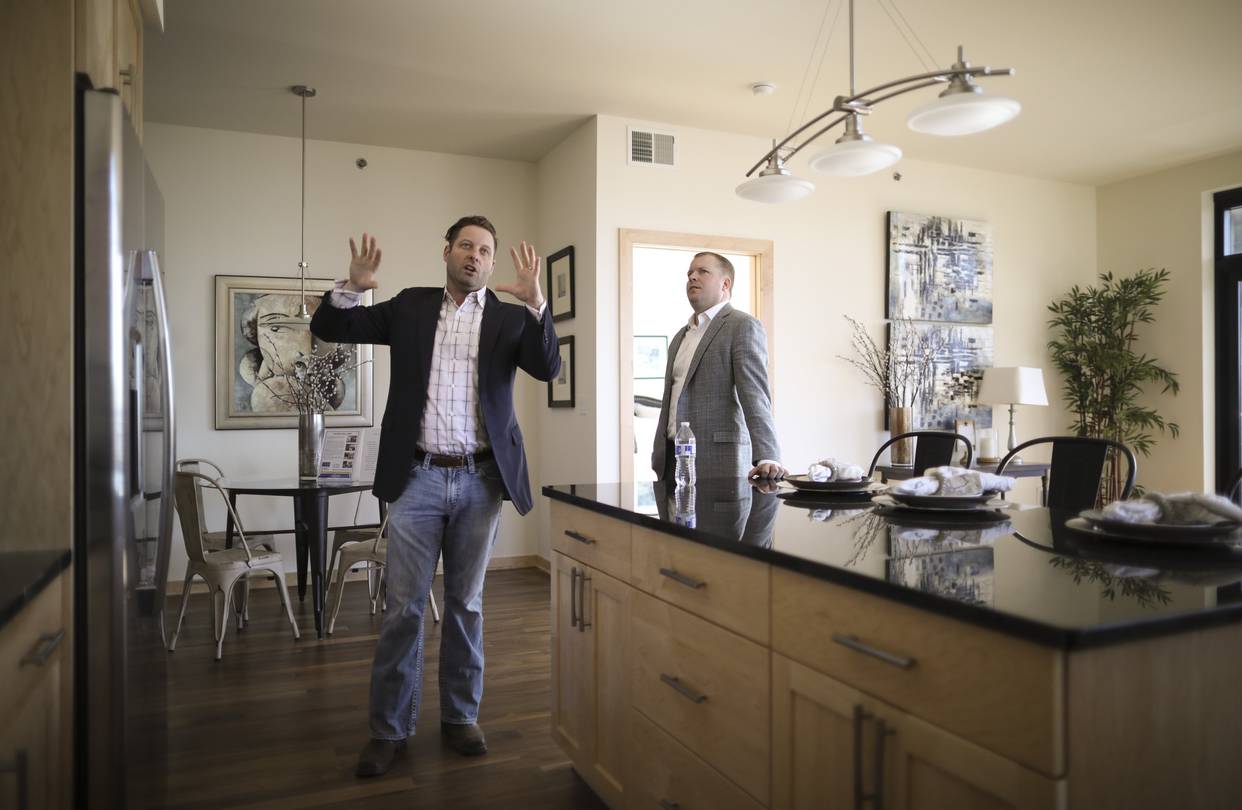 The inventory of homes for sale in Minneapolis dropped by about 25% in February compared with a year earlier, while the median sale price rose by 7.6% to $223,000, according to the Minneapolis Area Association of Realtors. That’s on par with the national median home price of $228,400. The average number of days homes in the area are spending on the market is at a 10-year low of 81 days so far this year.

Ms. Manthie, a 33-year-old consultant, is 41 weeks pregnant, but she and her husband are still trudging to open houses most weekends in search of a four-bedroom home in the $700,000 range—up from $400,000 when they started.

“It’s shocking. The house [two doors down from] my mother-in-law went in three hours,” she said.

This year’s spring selling season promises to be the toughest for buyers in a decade, economists said, as rising prices and mortgage rates combine with inventory near 20-year lows.

“We think that 2017 will be the fastest market” since the peak of the last housing boom in 2006, said Nela Richardson, chief economist at Redfin. So far this year, homes are selling an average of eight days faster than last year.

It isn’t just hot spots like Seattle and Denver that are seeing scarce supplies of homes for sale but also sleepier locales like Minneapolis, Cleveland, Nashville, Tenn., Tampa, Fla., and Louisville, Ky.

These markets typically are enjoying strong job growth with young first-time buyers out looking for homes, but also declining inventories, according to Svenja Gudell, chief economist at Zillow.

Economists had predicted the inventory crunch would ease this year, as several years of solid price gains induced more sellers to put homes on the market and spurred home builders to break ground on more new homes.

Instead, inventory has gotten tighter as demand has increased rapidly and the pickup in construction has lagged behind. Sellers also have become hesitant to put their homes on the market because rising prices and mortgage rates have made it more expensive to trade up.

In December, the number of homes for sale hit the lowest level since the National Association of Realtors began tracking such data in 1999. It has ticked up slightly since, but inventory in February remained 6.4% below a year earlier and about 30% below the long-term average.

Single-family housing starts rose to a 10-year high in February but remain about a third below the 50-year average.

The lack of inventory is pushing up home prices, which grew at the fastest rate since mid-2014 in January, climbing 5.9% compared with a year earlier, according to the S&P CoreLogic Case-Shiller Indices.

Adding to affordability challenges for buyers, mortgage rates have risen to 4.14% from about 3.5% in November, according to mortgage-company Freddie Mac.

“Looking at 2017, we feel pretty good about housing but we don’t think we’re going to match [last year’s] volume,” said Len Kiefer, deputy chief economist at Freddie Mac. “The main reason for that is this tight inventory and that, when many buyers come to the market in the spring, affordability is going to be a real challenge.”

Unlike boom-bust markets such as Las Vegas, Miami and parts of coastal California, Minneapolis has typically been a fairly stable housing market. Investors are fairly rare and the area has long been an affordable place for young families to buy homes.

Home prices have risen 55% since the market bottom in 2012 and hit a new high in 2016, according to the local Realtors association.

Chris Prescott, an agent at Redfin, said he has seen examples of sellers receiving 25 offers, including cash buyers bidding significantly over the listing price.

“I don’t know where these cash buyers are coming from,” he said. “We have not seen a market like this in the Twin Cities in a very long time.”

Katey Bean, a Realtor for Keller Williams Realty in Minneapolis, recently held an open house for a three-bedroom bungalow priced at $265,000 and counted at least 80 attendees.

“You can see in their face, they just look distraught,” she said of the would-be buyers. “You just almost want to hug them.”

Corrections & Amplifications
Buying a home this spring will be the hardest in years. The headline on an earlier version of this article incorrectly stated it would be the hardest ever. (April 2)

Easy to make and loved by the entire family…..cacciatore aromas fill your kitchen — no — your whole house…..with comfort and warmth as it looks after itself on the stove or in the oven!

Cacciatore means hunter in Italian, and alla cacciatora translates to a  ‘hunter-style’ meal with chicken (or rabbit), onions, tomatoes, herbs, vegetables, and usually wine or vinegar. This is one of those recipes I found years ago in an old, tattered Italian cookbook, and every time I’d remake it through the years, I’d change something or adjust the cooking, which eventually brought me to this recipe. One I love and make time and time again.

Keep it low carb and serve over cauliflower rice or vegetables. OR carb load it with pasta or rice! If there are any leftovers, the flavours are even better the next day! Or you can freeze it for another night.

Season chicken with salt and pepper. Heat oil in a heavy cast iron skillet, drizzled with olive oil.
Add the garlic and fry until fragrant (about 30 seconds). Add the onion, peppers, carrot, mushrooms and the herbs; sauté for 5 minutes until the onion is transparent and the vegetables are beginning to soften.
Add the chicken and sear on both sides until deep golden brown on both sides. (Occasionally mix the vegetables around the chicken in the pan so they don't stick).
Pour in the wine and allow it to simmer and reduce down (about 5-6 minutes).
Add the crushed tomatoes, tomato paste, Roma tomatoes and chill flakes. Season with salt and pepper to your tastes. Continue to cook over stove top OR in the oven following the instructions below.
FOR STOVE TOP:
Mix all of the ingredients together; cover with lid, reduce heat and allow to simmer (while stirring occasionally) for 30-40 minutes or until the meat is falling off the bone. Add in the olives, allow to simmer for a further 10 minutes. Garnish with parsley and serve immediately.
FOR THE OVEN:
Transfer the covered skillet to a preheated oven at 375°F | 190°C and cook for 50 minutes. Remove the lid and cook for an additional 20 minutes until the chicken is tender and falling off the bone, and the sauce has reduced down.
FOR THE SLOW COOKER, USE THIS RECIPE: http://cafedelites.com/2016/11/08/slow-cooker-chicken-cacciatore/
NOTES
If the sauce is too thin for your liking, add 2 tablespoons of tomato paste while it's simmering to thicken.
TO MAKE AHEAD:
This chicken cacciatore can be made up to 1 day ahead, cooled, covered and refrigerated. Rewarm over low-medium heat.
TO FREEZE:
Transfer the cooled cacciatore into an air tight container and transfer to the freezer. The day of serving, thaw it out in the morning and bring to room temperature. Transfer to a skillet / pan and reheat over low-medium heat until warmed through.

What child has not dreamed of having a house in a tree?  The idea of being able to climb a tree and live in freedom and harmony with nature is something that appeals to every human being and the best place to find all those feelings it is to do inside these houses.

A lucky few sure they could fulfill that dream of having a house in a tree when they were small. However, most mortals have to settle us take a look at that today can be considered as the tree houses most beautiful and spectacular in the world.

Most  tree houses  are small recreational buildings built in the backyards with garden for the little ones spend a few hours in them.

However, others are authentic luxury hotels or homes that have become the most popular attractions for tourists in the area. This is the case of this tree house located in  British Columbia, Canada.

This impressive home is one of the tree houses highest in the world. It is located in the forest,  about 23 kilometers from the town of Revelstoke. His impressive height is only surpassed by the magnificent forests that surround it .

One of the most curious tree houses and incredible is this designed by  Joel Allen, a former software developer who at age 26 decided to retire and become a carpenter.

This unique property is located somewhere near Whistler, near Canada. Its exact location is not known, since Allen decided not to disclose for legal and personal reasons.

Far from Canada,  in the mountains of Sweden, we find one of the most spectacular tree houses in the world.

This is a huge bucket of mirrors, designed by  Mirror Tham & Videgard, part of one of the strangest hotels in the Nordic country. This house intends to camouflage the structure in the forest to make guests feel they are part of nature.