A surge in Tesla Inc. TSLA -1.47% stock during morning trading gave it the title of largest U.S. auto maker by market value—a feat that would have seemed highly improbable 13 years ago when the electric-car maker based in Palo Alto, Calif., first began tinkering with the idea of making a sports car.

Shares in Tesla rose as high as $313.73 Monday, helped by an upgrade by Piper Jaffray, pushing the company’s market capitalization to $51.17 billion. That high-water mark exceeded Detroit-based General Motors Co., which at its lowest point Monday was worth $50.93 billion. By the market’s close in New York, however, Tesla’s gains had faded, leaving its market value at $50.95 billion compared with GM’s $51.18 billion. Ford Motor Co. F -0.35% closed the day at $44.8 billion.

Still, that Tesla was valued higher than GM underscores the profound change occurring in the global automotive industry as Silicon Valley pursues a vision for transportation—including self-driving cars and vehicles on demand—that could upend century-old competitors. Last week’s disappointing monthly sales results by traditional auto makers served as a further example to investors concerned that the profitable U.S. new-car market is plateauing.

“We’ve built a track record of strong financial performance,” a GM spokeswoman said in an email. “We’ll stay focused on delivering outstanding results and making decisions to deploy capital where it will generate the strongest returns, to enhance shareholder value.”

GM is the largest auto maker in the U.S. by market share, making up 17.3% of the sales last year, according to Autodata Corp. Tesla had a 0.2% share, which beat Ferrari and Maserati.

Tesla vs. Ford: Understanding Wall Street’s Math (April 4)
Tesla Shares Surpass $300 Mark (April 4)
Tesla, on a Hot Streak, Passes Ford in Investor Value (April 3)
Why China Can’t Get Enough of Elon Musk (April 1)
“What’s fun about following this company now is that anything can happen,” Chaim Siegel, an analyst for Investing.com, said in an email about Tesla that aligns with investor sentiment even as the auto maker remains unprofitable and deeply in debt. “The potential is huge. The hopes are huge.”

Even some of Tesla’s most optimistic followers didn’t expect the extent of the recent surge in value. “We’re pretty surprised by the recent run in Tesla’s share price to over $300 so quickly,” Adam Jonas, an analyst for Morgan Stanley, wrote in a note to investors as Tesla’s market cap neared GM’s. He had been targeting a $305 price for Tesla. “Such is the power of technical factors over fundamental drivers,” he said.

Tesla shares are up more than 40% this year, a move that last week led Chief Executive Elon Musk’s company to surpass Ford as the second-largest auto maker. The exuberance comes even as Mr. Musk faces huge challenges in accomplishing all he is claiming to do, including making 500,000 vehicles next year after building just 84,000 last year and creating software that would enable a vehicle to drive itself.

“It’s indicative of the market wanting to pay for potential, including into markets that don’t exist yet in any large size such as [electric vehicles], home energy generation and storage, rather than profits and cash flow today that the large auto makers generate,” said David Whiston, an analyst for Morningstar Research.

Mr. Musk, who has struggled to bring out new products before, faces the daunting challenge of later this year rolling out the $35,000 Model 3 sedan, the linchpin in his plans to take the company into the mainstream from the rarefied air of selling luxury vehicles.

His acquisition of SolarCity Corp. late last year and removal of the word “Motors” from the company’s official name are part of a broader vision of being able to offer solar panels to generate energy and batteries to store that power at home or the office—all for the benefit of the vehicles being sold. He has also begun shipping vehicles equipped with the hardware he says is needed to make them fully self-driving once the software is completed, aiming to demonstrate the prowess by year-end.

It is a vision that received a strong endorsement late last month with the revelation that Chinese technology company Tencent Holdings Ltd. , best known for China’s largest social network, WeChat, had acquired a 5% stake in Tesla.

“The sooner investors view Tesla as a transportation/infrastructure company rather than just a car company, the more we believe the industry events to come over the next 12 to 18 months will make sense,” Mr. Jonas wrote.

Tesla in High Gear: Surpasses Ford Investor Value
Tesla overook Ford in investor value for a time Monday, despite being unprofitable and deeply indebted. WSJ Detroit bureau chief John Stoll explains why on Lunch Break with Tanya Rivero. Photo: Bloomberg
Investors continued to push Tesla shares higher last week after the announcement of a record quarter of vehicle sales. Meanwhile, GM reported a modest U.S. sales gain for March, lifted by truck demand, and said Chief Executive Mary Barra earned $22.6 million in 2016, a decline of 21% from 2015 when she was awarded a sizable retention package. Ms. Barra, at the helm since 2014, has said her goal is to make GM the most valued auto maker in the world.

For GM, Tuesday was particularly painful. The Detroit auto maker, which sold 10 million vehicles last year globally, has been rushing to develop its own self-driving technology, acquiring Cruise Automation last year in a deal that could be worth $1 billion, and investing in ride-hailing service Lyft.

Ms. Barra’s predecessor, Dan Akerson, a former telecommunications executive, was concerned about Tesla’s potential, setting up a team to study how the electric-car maker could threaten GM and challenging his senior executives to war-game-like scenarios.

GM has been especially aggressive in recent years in trying to thwart Tesla, pushing legislation in states in an attempt to block the company’s strategy of selling directly to customers instead of using franchised dealers like the rest of the auto industry has done for generations. In preparing the new Chevrolet Bolt all-electric small car, seen by some as GM’s answer to the Model 3, Ms. Barra said in January 2016 at CES, the annual consumer-electronics show in Las Vegas, that GM’s dealer network gave it a competitive edge. Tesla’s belief in having the ability to control its own stores is prized highly among the company’s senior leaders.

GM’s vision of a world with self-driving cars dates to concepts it introduced at the 1939 New York World’s Fair, but innovation took a back seat among many recent leaders as the company fought to avoid bankruptcy.

Ultimately, GM’s debt load and the 2007-09 recession led to what was then-unthinkable years earlier: GM’s U.S. government-backed bankruptcy-court reorganization in 2009.

Financially, the company has roared back, reporting record profits and developing some of its best vehicles in a generation. But investors have largely yawned. Shares in GM closed at $33.71 on Friday, compared with the company’s postbankruptcy-court initial-public-offering price of $33 in 2010.

“It’s absolutely mind-boggling that we’re even discussing GM and Tesla reaching a parallel,” said Dave Sullivan, an industry analyst with AutoPacific. “It’s not as if they are sitting on some sort of blockbuster drug that isn’t available in generic form. The wide rollout of electric vehicles by Jaguar, Daimler, BMW and Audi is right around the corner.”

Write to Tim Higgins at Tim.Higgins@WSJ.com 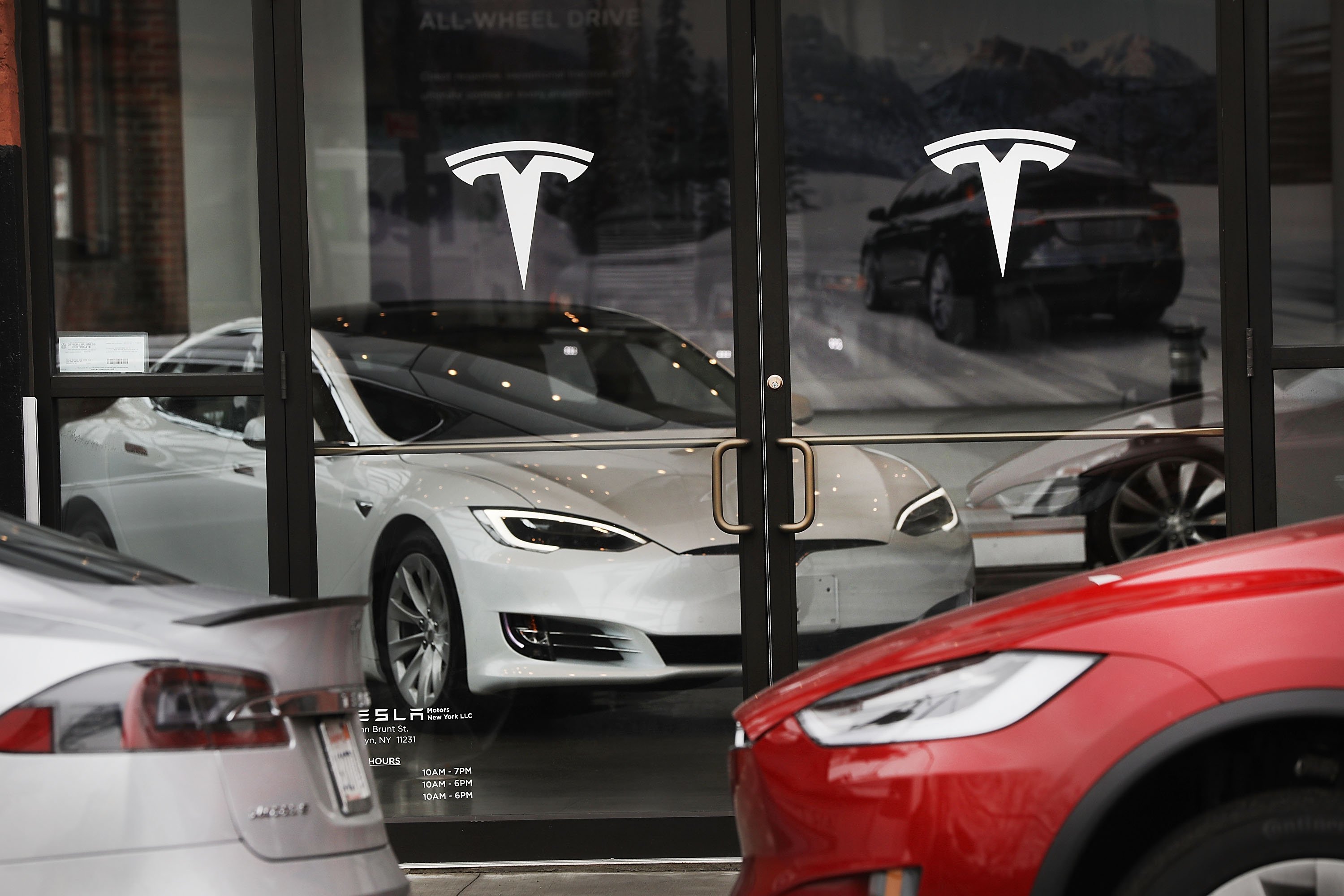 Daimler’s Mercedes-Benz division and automotive technology giant Robert Bosch GmbH have teamed up to run the vehicles in at least four locations, including Silicon Valley and their hometown of Stuttgart, according to a statement on Tuesday. Competing with newer entrants such as Uber Technologies Inc. and traditional rival BMW AG, the project will allow customers to order automated cars via smartphone. 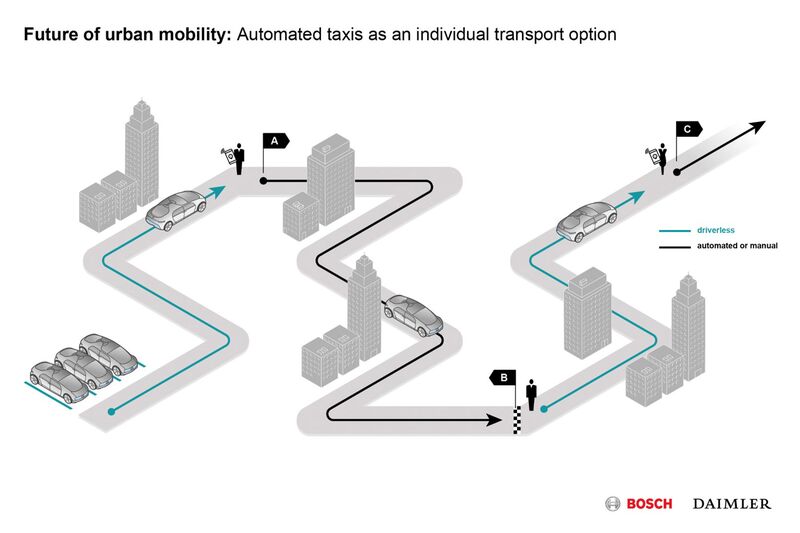 Source: Mercedes-Benz – Daimler AG
“The idea behind it is that the vehicle should come to the driver rather than the other way round,” Daimler, parent of the world’s biggest luxury-car maker and Bosch said in the statement. The venture will have a workforce of a few hundred people.

Carmakers and new competitors like ride-hailing startup Uber are pouring billions into making vehicles smart enough to navigate streets on their own. While some traditional manufacturers such as Fiat Chrysler Automobiles NV are tying up with technology providers to save costs, Daimler is developing models for a new era of self-driving vehicles largely on its own.

Building a fleet of robo-taxis will allow the German company, which is also the world’s largest maker of commercial vehicles and the owner of the Smart city-car brand, to monetize the technology once it hits the mainstream and avoid becoming a lower-margin hardware supplier to Silicon Valley newcomers. It also allows Daimler to retain control of the relationship with drivers and the valuable data they generate — even if they no longer own the cars they ride.

The partnership between two German automotive heavyweights is part of a broader shift as the industry braces for disruption. Daimler must adjust to “fundamental changes” as autos become increasingly capable of driving themselves and run on electric motors, Chairman Manfred Bischoff said at the annual shareholders meeting last week.

Investing in the future has been costly for Daimler, which has been experimenting with autonomous features for years. The company warned its profit will rise only slightly in 2017, as research and development costs continue to climb after jumping 15 percent last year to 7.6 billion euros.

Daimler has already branched into new services in response to shifts in how people use vehicles. In 2015, BMW, Daimler and Volkswagen AG’s Audi division joined up to buy Nokia Oyj’s HERE real-time maps unit for 2.8 billion euros. The Daimler-Bosch venture will use HERE’s technology. The reliability of self-driving vehicles will be a critical focus of the new project after Uber suspended an automated-car trial because of a crash in Arizona last month.

Even if shifting into services and self-driving vehicles risks sapping demand for private cars, there may be no alternative for manufacturers. Autonomous vehicles will probably make up 25 percent of new car sales by 2035, according to a Boston Consulting Group study.